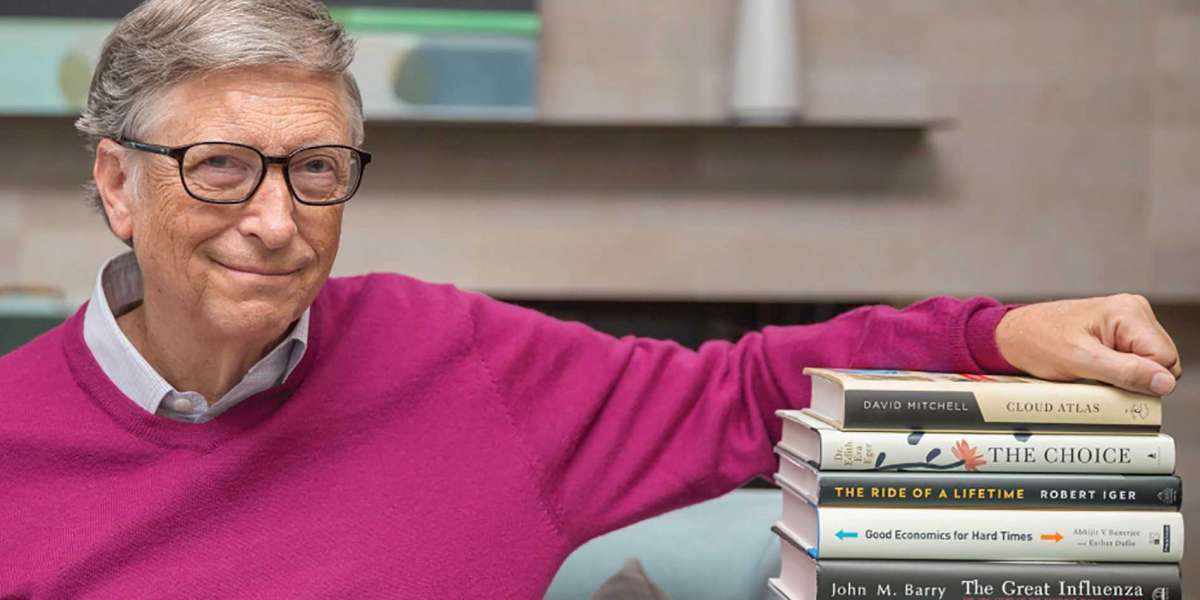 I used to think that reading anything else other than straight self-help was a waste of time.

I dove into the reading list of a pro. Again.

So far, as a reader, my reading has been restricted to generic self-help. I used to think that reading anything else other than straight self-help was a waste of time. Obviously, I was dead wrong. And thankfully, I’m not of the same mindset anymore.

Now, I’m into exploring various topics as a reader. I’m doing this to stretch my perspective. When I found out that Bill Gates read some books twice, I recognized an opportunity to diversify my reading topics. So I read them too.

This list has books from genres that I’ve never touched before. Hard science fiction. History. Medical thriller. You name it. If you too are looking to skew a bit away from your current reading interests and explore newer topics, these five books are totally worth it.

I have three words for this book. Oh. My. God.

I don’t usually read fiction. And I’ve never even touched science fiction. So I read this book only because Bill recommended it. And it blew my mind. Just like a celestial object blows up the moon in this book.

What? Yes. You read that right. The book starts when a massive object in space called the ‘Agent’ strikes the moon and breaks it into seven pieces. These pieces still coherently revolve around the old moon’s centre of gravity. However, as predicted by the world’s leading scientists, these pieces would clash amongst themselves, creating further smaller pieces.

Eventually, many of these pieces will escape the old moon’s gravitational force and race towards the earth. As named by one scientist, the Hard Rain will approximately take place in two years and last for two thousand years. At that time, rest assured, all life on earth will be destroyed.

Earth is now a ticking time bomb. So to preserve humanity, all the nations of the world come together in an ambitious plan to send some of their own to outer space, where humanity would wait out the hard rain, hopefully, to return to their home planet.

But survival in outer space isn’t so simple. Lot’s of challenges await them. Do they succeed in preserving humanity? If they do, what happens when they return to their terrestrial home?

Seveneves is a book that showcases Neal’s exceptional capacity for imagination. Bill was so impressed by Neal’s work that he even decided to meet him and shared a video titled.

Seveneves is, as you can imagine, a tough read. But it’s absolutely worth it. If you haven’t tried science fiction, I can’t imagine a better place to start.

Upheaval: Turning Points for Nations in Crisis by Jared Diamond

The Pulitzer-prize winning author Jared Diamond lived up to his reputation with this book.

The book discusses insights from crisis therapy that takes place on an individual level and draws parallels to explain to the readers how different nations cope with crises.

It starts by explaining what psychologists know about how people react when their lives are turned upside down — like being fired from jobs or losing their loved ones. Crisis therapists have studied various factors, the presence of which, or lack thereof, determine whether people navigate the crises successfully or not.

Jared condenses these insights into 12 factors and tweaks them a bit to adapt to national crises. He then takes us through a series of case series discussing how various countries like Australia, Chile, Finland, Germany, Indonesia, and Japan dealt with major crises throughout history.

At the end of the book, Jared moves from looking backwards to looking forwards. He talks about some major challenges the world faces — like climate change — and talks about how the twelve factors can be applied to help us emerge victoriously.

This book might not be for everyone. But if you’re looking to read something new, something unique, or interested in learning about the interesting history of these countries, I’d highly recommend this book.

The End of October by Lawrence Wright

There’s an unbelievable coincidence with this book. The book is a medical thriller about a deadly virus that brought the world to its knees. Sound familiar? The coincidence is that this book was published in April last year, right around the time of the COVID pandemic.

The story revolves around Dr Henry Parson, a microbiologist and epidemiologist who first suspects a new viral disease when many people die at a camp in Indonesia. From there, shit hits the fan, and the disease starts spreading worldwide, and Dr Henry tries to contain and find a cure for the disease.

If I’d read this book a couple of years ago, I’d have scoffed at every second page claiming that it’s exaggerated. However, with the real-world pandemic still going on in the world, and especially in my country India, I found myself repeatedly thinking, “This happened. And yep. This too.”

The book centred around a pandemic unfolds an amazing story that I really enjoyed reading. Medical thriller was a new genre for me to try out. And I liked it. I recommend you try it too.

In an episode of The Office, Michael, the weird and hilarious boss, shows up at work and starts expressing his concerns about how much China is growing as a country. Naturally, being an American who was told since he was a child that The US of A is the best country in the world, the rise of China didn’t sit well with him.

However, one of his employees, Oscar, believed that Michaels’s concerns were exaggerated. Eventually, they end up in a conversation along the lines of the question, “Is China going to overtake America?”

This book is about that and more. You see, Thucydide’s trap is one where a ruling nation is threatened by a rising one, and the rising nation wants to displace the ruling nation. In this case, China wants to overtake America in growth, and it is getting closer, which makes America feel threatened.

This begs the question — “Are America and China destined for war?” That’s what this book tries to answer through an intricate web of discussion along the lines of several subjects — war dynamics, politics, psychology, history, and more.

I read this book because I’m trying to challenge myself to read about various subjects. At first glance, I didn’t expect to gain much from this book. I mean, I’m neither an American nor a Chinese. But surprisingly, this book taught me a lot of amazing stuff about a spectrum of topics. Therefore, I highly recommend this book even if you don’t belong to these countries.

Origin story: A big history of everthing by David christian

David Christian created a course called big history. Big history is an academic discipline that begins at the very start of this universe, the big bang, and talks about the journey to now. In essence, this book is an abridged version of his course.

Think about it. Most of the history you might have read might have been about a tiny sliver of our infinite past. But what would it be like to take a lot of steps back, and then some, to try to visualise our entire history at once?

That is what David has set out to do with his course and his book. By recognizing some major milestones in our universe's journey, what David called “thresholds”, he divided the book into a series of crucial chapters that make it really easy to understand the history of our universe.

How did the universe take birth? When did life appear on earth, and how? How did that simple life evolve into the complex multicellular organisms that walk the surface of this planet? How did humans accumulate the power to take over the world? And, what lies ahead for humanity?

These are the kind of questions this book answers. Filled with stunning insights, this book will reframe your perspective of the cosmos and leave you in awe of the universe you live in.

A few weeks ago, when I was stalking Bill Gates’ Goodreads account, I found out that there are nine books that he’s read twice. I knew I had to read those books. So I did. This article is about five of those books. I covered the other four in another article. Do check it out if you’re interested!

~(This take from source)